An interesting new paper in PNAS examined neural coupling between early (~Heschl's gyrus) and later (~STG) stages of auditory processing of speech sounds using a mismatch paradigm. The 标准 was a word and the 异常 differed acoustically within or across a vowel category. Stimuli activated networks in both the left and right hemisphere, but when the 异常 crossed a phoneme category boundary an increase in coupling between early and later auditory areas was found in the left hemisphere. A reverse hemisphere effect was found for control tone stimuli.

我们感兴趣的是发现大脑中语音的有意义的，不变的表示形式的抽象是如何发生的。为此，我们使用了MEG，DCM和采用语音和非语音刺激的失配范式。在演讲条件下，我们播放了重复‘standard’刺激（“ Bart”一词）并定期交织三处‘deviant’ stimuli created by manipulating the spectro-temporal profile (i.e. formant frequencies) of the vowel sound within the word. The first 异常 was behaviourally distinguishable from the 标准, but still sounded like 'Bart'. The second 异常 was only slightly further away than the first in terms of formant frequency but far enough away that it contained a different phoneme and therefore sounded like a different word - ‘Burt’. The third 异常 was much further away acoustically from the 标准 and sounded like the word ‘Beet’. We thus had three speech 异常s that were all acoustically different from the 标准, two of which also differed phonemically. We presented the same subjects with an additional set of non-speech sine wave stimuli; a 标准 tone of the same length and frequency as the 2nd formant of the vowel sound of the speech 标准, and three tone 异常s of increasing frequency that were matched on the basis of behavioural discrimination to the speech 异常s. We modelled the event-related field associated with each 异常 with DCM. Our main finding was that although processing of both speech and non-speech sounds engage the same bilateral network within auditory cortex (HG and STG), there is a difference in the way that the brain processes a stimulus change that has a functional meaning (i.e. a phoneme change) versus those that do not. Essentially, phonological processing causes a relative increase in postsynaptic sensitivity within higher levels of auditory cortex in the left hemisphere (left STG) and a concomitant decoupling of the hemispheres 在 this level. In contrast, the effects of equivalent non-speech stimuli change are seen in lower-levels of auditory cortex in the right hemisphere. We do not argue that speech perception 在 the phonological level is purely left-lateralised, but rather that it engages a bilateral network that displays asymmetric organisation 在 higher levels of the cortical hierarchy. My guess is that this asymmetry exists because of the likely subsequent interaction between phonemic and lexicosemantic representations; I would argue that the abstraction of higher level, post-phonemic representations is quite strongly left lateralised (e.g. see our Journal of Neuroscience fMRI DCM paper of last year). 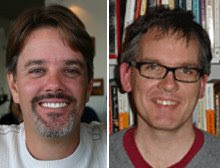